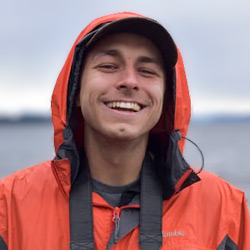 With active volcanoes, the highest mountains in North America, and some of the most dramatic glaciers on the planet, Alaska has enough fascinating geology to keep an Earth scientist busy for many lifetimes; the Last Frontier’s extensively deformed and powerfully jumbled rock layers illustrate a complex and extraordinary geologic history spanning hundreds of millions of years.

In this article, I’ll boil down the research and lay out a basic framework to help make Alaska geology more easily digestible. That way, you’ll know exactly what you’re seeing when you observe the Inside Passage’s magical landscapes firsthand!

Some of the rock layers that make up Alaska are, frankly, unfathomably old. Indeed, material exposed at the land surface is in some places from Precambrian time, before the dinosaurs or even any land plants existed! Interestingly, however, some cooled Alaskan lavas are literally younger than you!

How is it that Alaska features rocks of such strikingly different ages? The answer lies in accretion. 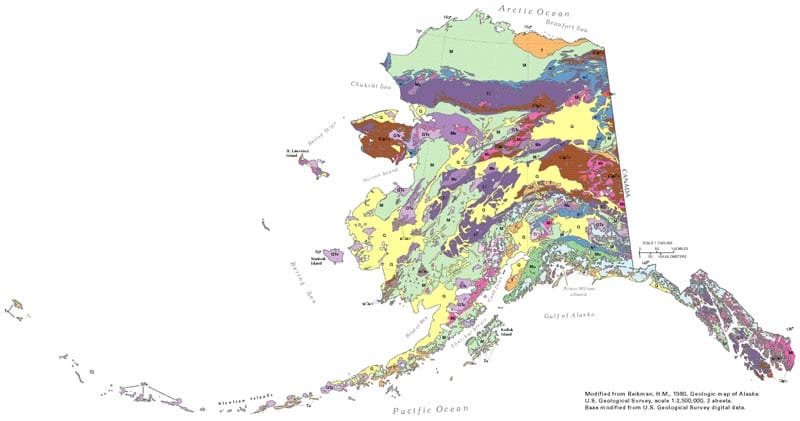 What a mess! Alaska’s rock record is a jumbled story spanning hundreds of millions of years. The various colors on this map represent variously-aged sedimentary, igneous, and metamorphic rocks that were plastered onto the landmass. (1)

Don’t panic! This geologic map is chock-full of detail, but the important point is quite simple: the Alaska that we know is effectively made up of hundreds of landmasses that over many millions of years have slammed into, or accreted onto, the growing body. And those differently-colored regions you’re looking at? Many of them represent rock that was carried along on mobile tectonic plates until it collided with Alaska. Over time, as more and more landmasses, or terranes, accreted onto the continent, Alaska grew in size even as it developed a more and more jumbled rock record.

As the Pacific Plate (left) dives under the North American Plate (right), melted rock rises up and is erupted as lava! This process was the fundamental cause of the huge Alaska earthquake of 1964. (2)

What’s more, similar processes continue to occur today! Have you ever noticed the lengthy Aleutian Island chain that stretches from Alaska’s southwestern corner across the northern Pacific and toward Russia? This prominent feature has developed in relatively recent geologic time as the massive Pacific Plate, which is moving northward at a few centimeters per year, ducks under the less-dense North American Plate. This so-called subduction of the Pacific Plate, responsible for many aspects of Alaska geology, causes the plunging rock to heat up and melt, creating lava that builds up the island chain a little more each year!

As we’ll see next, the motion of tectonic plates is responsible for several distinct geologic features that characterize the Land Frontier.

You may already be aware that Alaska is home to the tallest mountain in North America. Denali, previously referred to as Mt. McKinley, tops out at a whopping 20,310 feet above sea level! Also a product of tectonic plate collisions, the truly imposing peak was first climbed in 1913 by a daring Episcopal priest named Hudson Stuck. On a clear day, you can see Denali all the way from Anchorage, some 130 miles away! 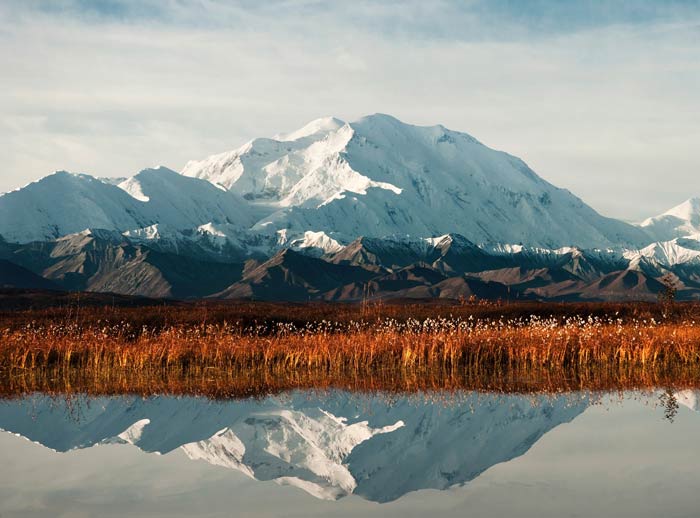 My, what a lovely peak! You can’t discuss Alaska geology without address this imposing goliath! Hard to imagine that Denali was first climbed in 1913, not to mention after a lengthy trek by dogsled! 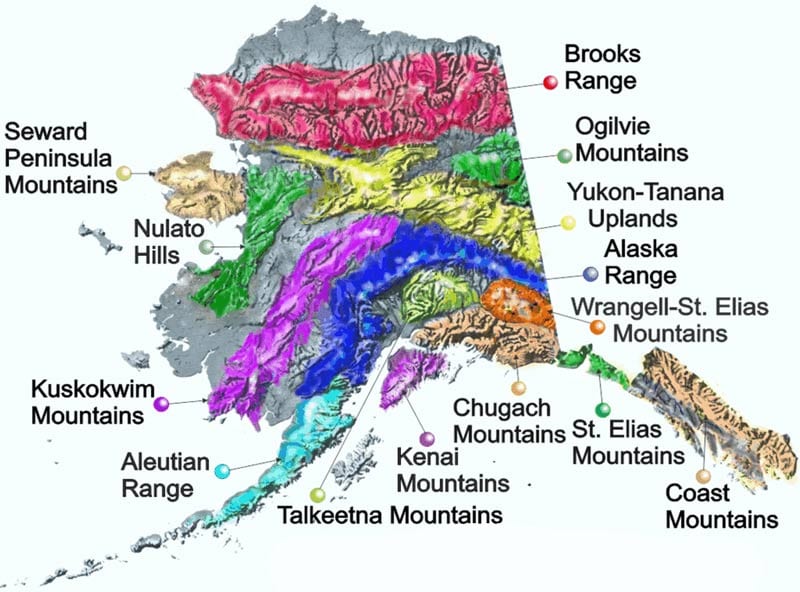 So many mountain ranges, it can be tough to keep track! Denali is in the Alaska Range (dark blue). (3)

Denali, though, isn’t by any means the only impressive mountain in Alaska. The state features so many distinct ranges, in fact, that keeping track of them all can be a bit confusing! From the Brooks Range in the far north to the Chugach and Talkeetna Mountains in southern Alaska, each of the state’s mountain ranges represents the accretion of new rock bodies followed by additional collisions that compressed this material and helped force it up toward the sky!

The Big Alaska Earthquake: The Price We Pay for Glorious Topography

If it’s occurred to you that the enormous collisions that characterize Alaskan geology probably don’t just happen peacefully and quietly, you’re right! Indeed, the extraordinary forces at work here have produced periodic earthquakes that rival any others on Earth. As the Pacific Plate, for example, has pushed its way below the North American Plate, it has from time to time slipped along in bursts that catastrophically shake the surrounding land in a powerful Alaska earthquake!

That’s exactly what happened on March 27, 1964, when a magnitude-9.2 Alaska earthquake originated around 80 miles east of Anchorage. The second most powerful quake in recorded history, the so-called Good Friday Earthquake devastated the developing port town. Even more impressive, at least to me, this Alaska earthquake caused the land surface in some areas around the Prince William Sound to rise or fall as much as several dozen feet! If you drive southeast from Anchorage on Highway 1, for instance, you’ll encounter the preserved skeletons of trees that were killed when, during this massive Alaska earthquake, the very ground supporting them slid down into the sea. 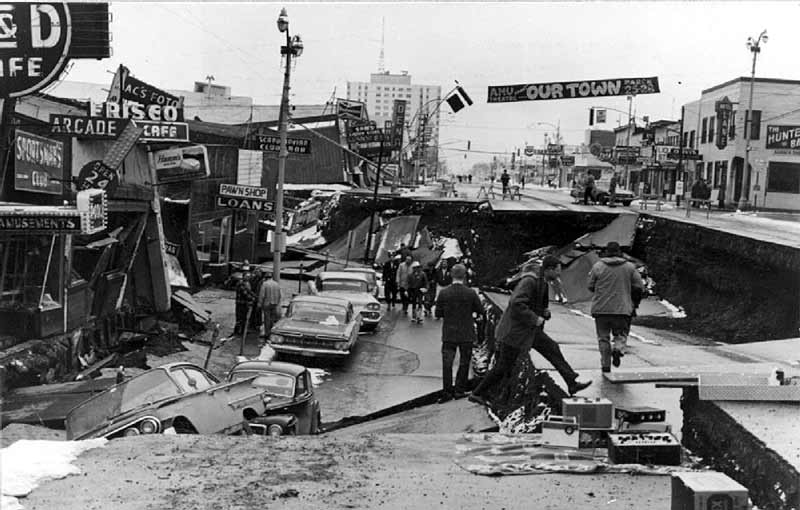 Volcanoes and the Ring of Fire

Remember the Aleutian Island chain I mentioned earlier? As part of the boundary between the Pacific and North American tectonic plates, it represents a 1200-mile-long portion of the notorious Ring of Fire. This massive structure, which roughly outlines the Pacific Ocean, is a seismically active band where most of the world’s major volcanic eruptions take place.

Considering southwestern Alaska’s place along the Ring of Fire, it makes sense that the Last Frontier is the home of a number of active volcanoes. One particularly notable example is Mount Redoubt. The highest of the Aleutian peaks, Redoubt has erupted explosively a number of times since it was first observed. In 1989, for instance, the mountain experienced a major blast that caused ash to rain down as far as hundreds of miles away! 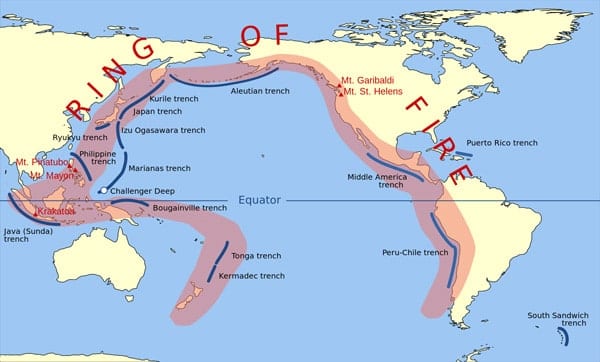 The so-called Ring of Fire, which roughly follows the outline of the Pacific Ocean, is a zone of high volcanic and seismic activity resulting from major tectonic activity. The massive 1964 Alaska earthquake was propagated along a portion of it. 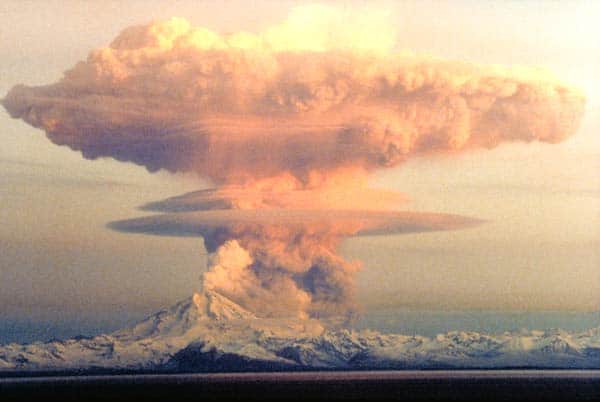 The 1989-1990 eruption of Mount Redoubt, southwest of Anchorage, lasted six months in total. A Boeing 747 commercial flight was caught in the initial ash cloud, but the plane was landed safely.

With its volcanic explosions and record-shattering earthquakes, Alaska is without a doubt the site of some impressive natural spectacles! Alaska geology, though, doesn’t only consist of the catastrophic. Besides a vast array of massive glaciers, Alaska features geologic oddities like Katmai National Park’s Valley of Ten Thousand Smokes, where ash from a 1912 volcanic eruption remains in some places more than 700 feet thick! Recent news to me, northwestern Alaska’s Kobuk Valley National Park even features a 20,000-acre patch of rolling sand dunes!

As complex a tectonic past as Alaska boasts, it’s no surprise that parts of the state are home to some pretty remarkable geologic resources. Just consider the 1898 Klondike Gold Rush, when tens of thousands of hopeful prospectors set out in search of mineral riches! In the past few years, you’ve also likely heard about conservationists’ efforts to protect the stunning Arctic National Wildlife Refuge from oil and gas exploration. Indeed, thanks ultimately to the powerful work of rocks, Alaska has a special way of calling in wealth-seekers and wanderlusty explorers alike. We’ll just have to make sure that, after all that Alaska’s given us, we work responsibly to help protect this last great wilderness for generations to come.

Check out some of these Alaska geology resources to follow up on what you’ve read here.

Daniel F
Travel Guru
Daniel first saw Alaska at age nine, after a weeks-long drive up the Alaska highway in a weathered RV. He's been in love with the Last Frontier ever since, and he's spent several months guiding teenagers in the wilderness around the Talkeetna Mountains north of Anchorage.

Tour comparisons and other helpful resources for activities in Alaska

Explore these top-rated excursions in Juneau, Skagway, and Ketchikan 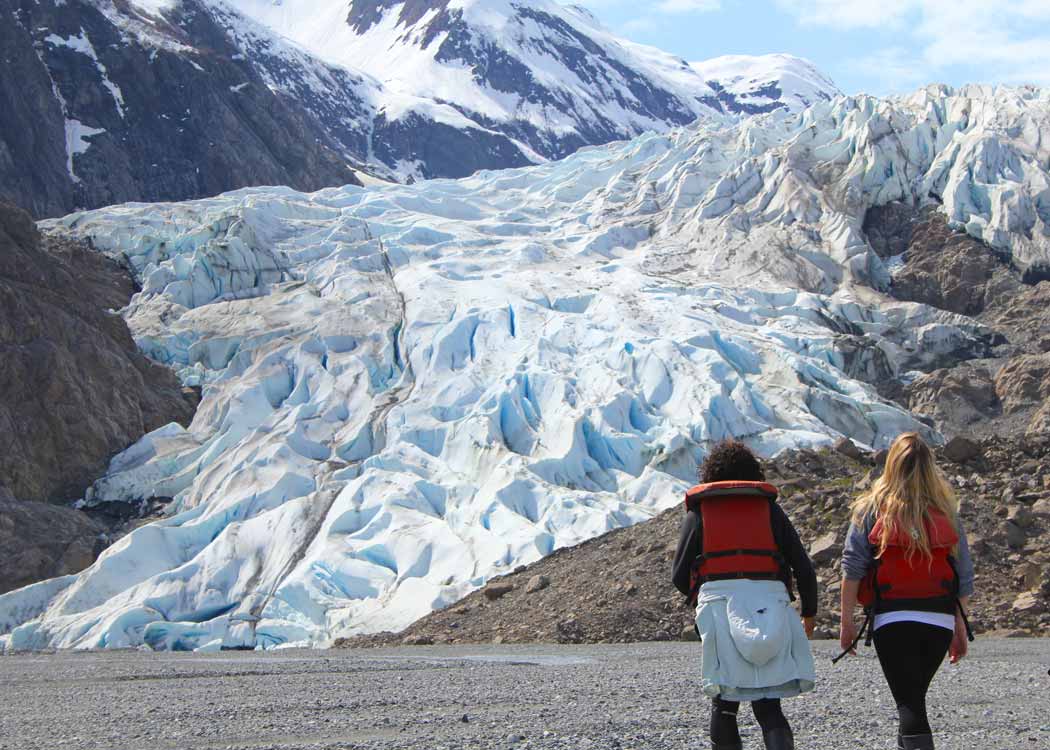 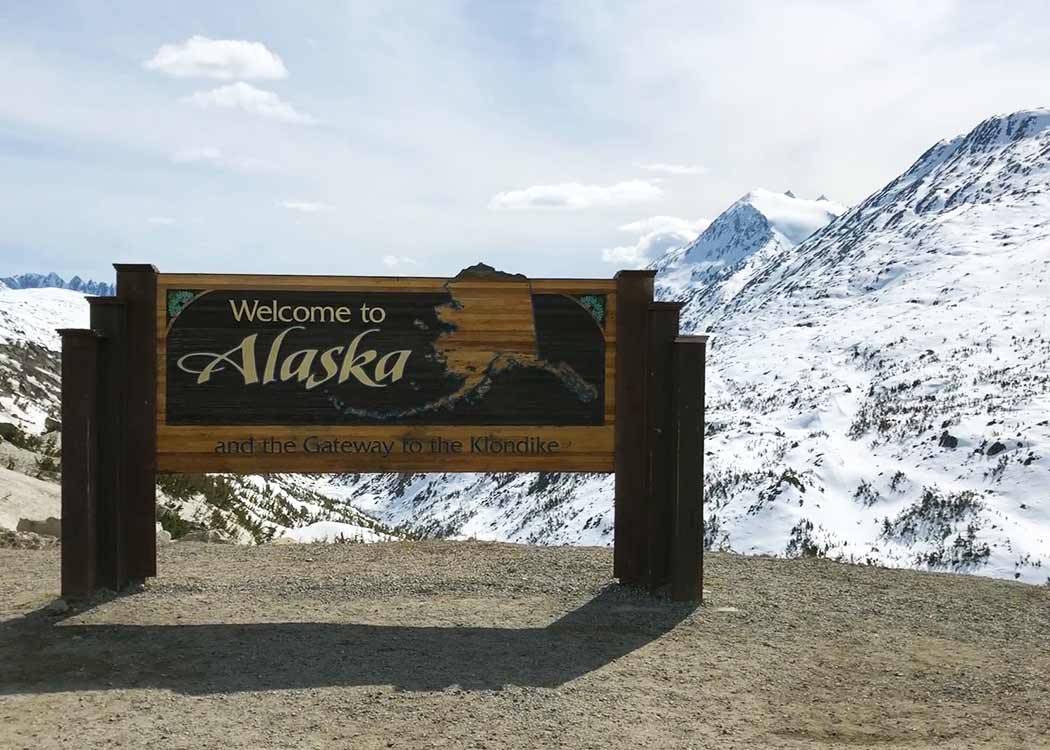 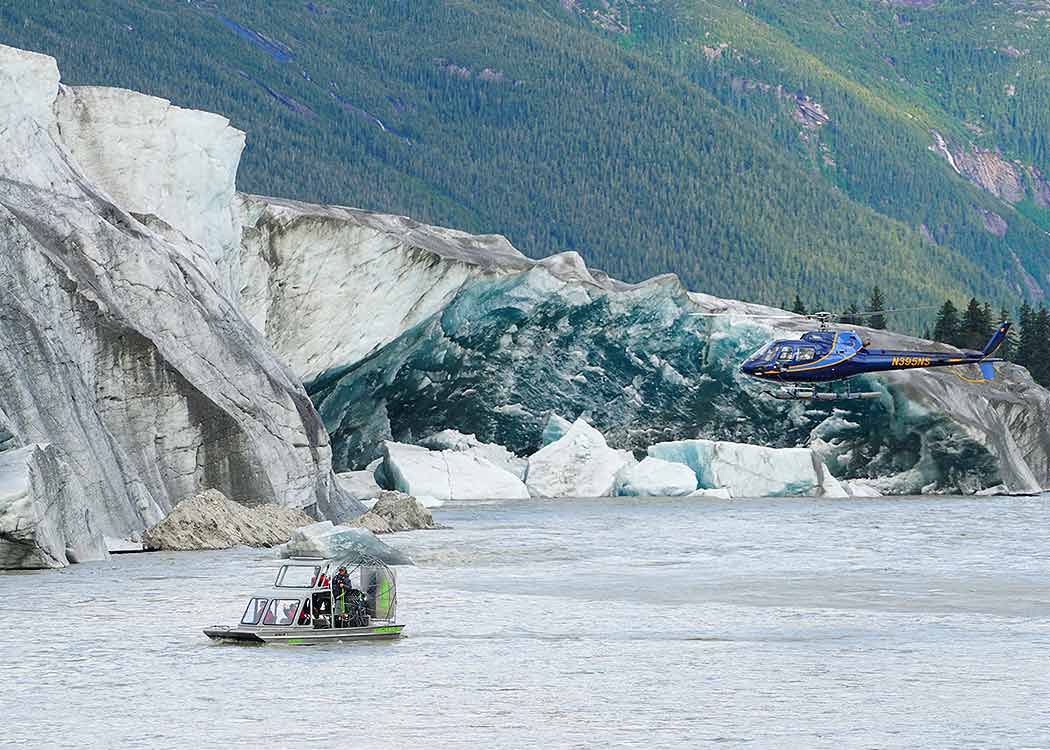 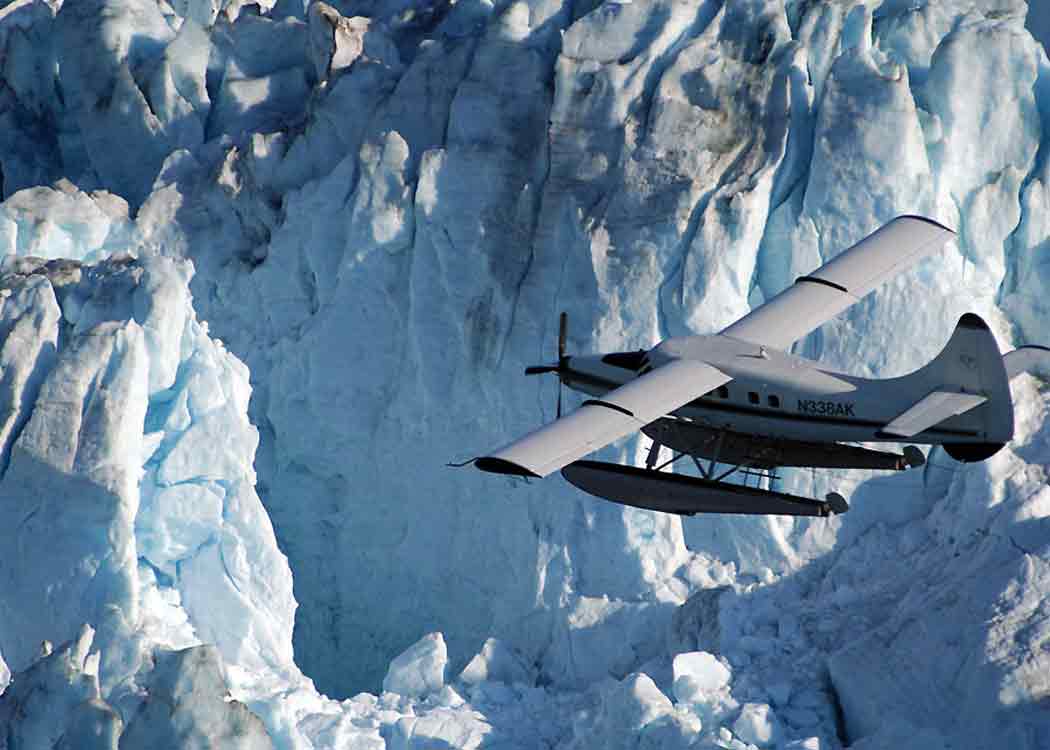 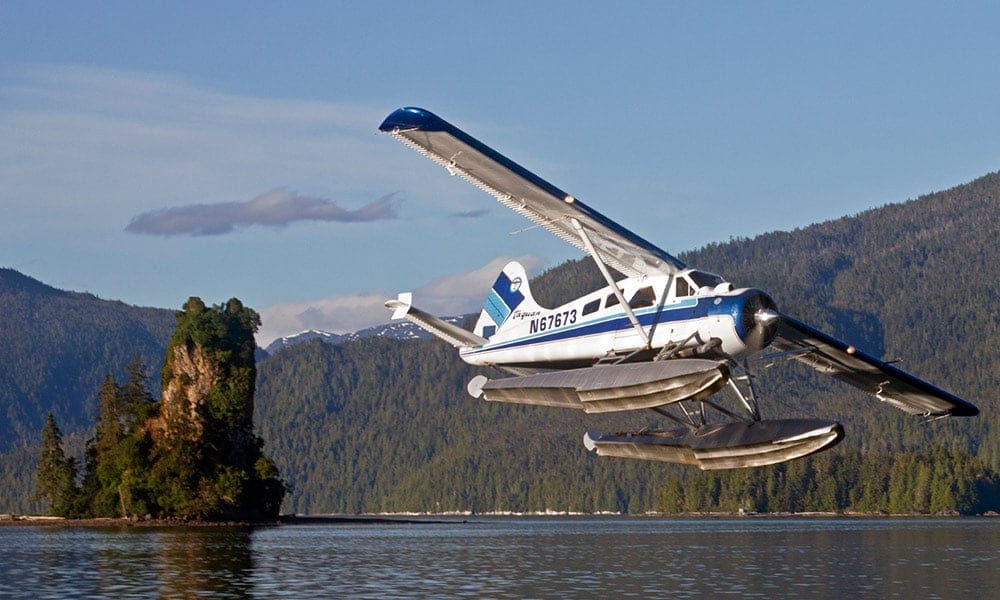